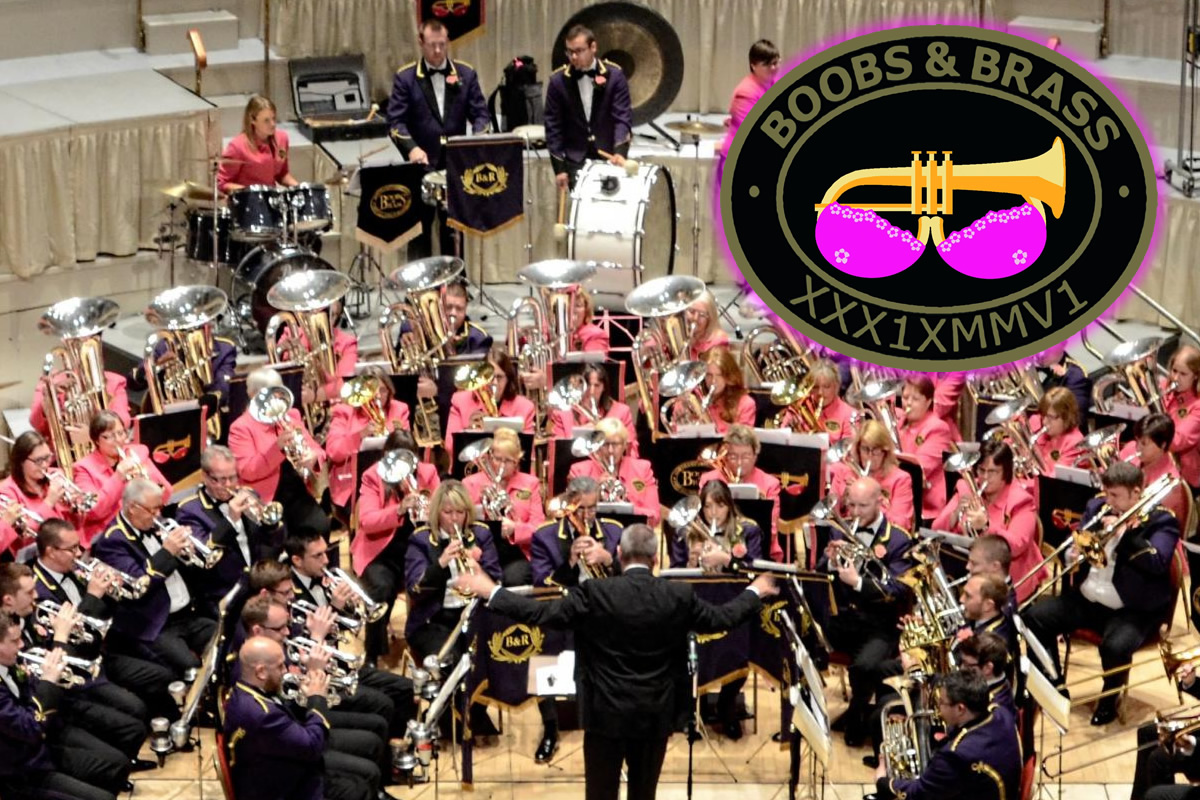 In 2006, two friends – Jane and Margaret - who both play the cornet in a brass band, sat talking over a cup of tea when Jane revealed it had always been a dream of hers to form an "all ladies" band but had only ever got round to "thinking" about it. Margaret decided it was time Jane did something about it and volunteered to help her. Within six weeks they had enough volunteers to form the brass band and to perform a concert and it was decided that any proceeds from this concert would be donated to charity. 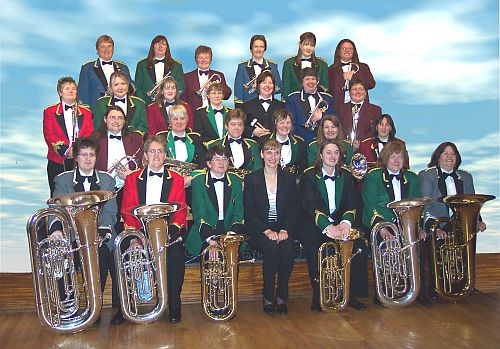 The original concert band in 2006 - before the pink jackets!

The charities chosen were the Ophthalmic Dept of Kettering General Hospital- where Jane works - and Breast Cancer Campaign – Researching the Cure .... which they thought to be very appropriate with 40 women playing members... hence the name of the Band. The name in itself has raised a lot of curiosity – a non-offensive name although some magazines are unable to promote our idea because of the name containing the word "Boobs".

However, the concert, which originally was to be a "one off", raised an incredible £5,000 and after many requests from players and supporters Jane and Maggie were persuaded to continue with this concept.

First Choice Holidays very generously donated pink jackets to the Band for their uniform and these were worn for the first time at the 2007 famous Whit Friday Marches. As the number of players increased we found we needed extra jackets to accommodate everyone and Dimensions Corporate Clothing Ltd very generously supplied us with further jackets so that we are now able to accommodate any lady from size 8 to size 28! Currently we have a mailing list of 140 ladies who we can contact for their availability for each performance. As you may well be aware, men can also get breast cancer and over the years we have received fantastic support from many male musicians including Trevor Groom, John Lee and Mark Walters. Whilst “Boobs & Brass” is predominantly female players, you will occasionally see a male amongst the ranks – if they are brave enough to wear the “pink jacket”!

The band continues to have fantastic support – not only did we receive our pink jackets, we have since received stand banners, pink music stands, music cases, a bass drum for the Whits, and financial support from various individuals and Companies. We are incredibly grateful to Yamaha UK, Korg Jupiter, Mapex Drums and Paiste cymbals for the loan and use of their percussion equipment.

Back in September 2006, none of us could have envisaged what has happened in the years that have followed – it has been an amazing journey. We have performed numerous concerts in various parts of the UK – we have shared the stage with some of the greatest bands in the world – who could have imagined that we would be invited by the world famous Brighouse & Rastrick Band to share the stage with them at the Huddersfield Town Hall to a capacity audience of 1200 people? What an amazing experience that was. Another exceptional opportunity offered to us was at the Butlins Mineworkers competition in 2010 when we were able to raise funds for Breast Cancer Campaign over the weekend – the `Boob Blow` attracted hundreds of musicians and a bit of controversy when the strains of `Lily the Pink` could be heard in the main competition hall during the quiet sections of the testpiece!! Our evening concert included our very own pipers from Alyth, soloists Katrina Marzella, Kirsty Abbotts, Sheona White and Simone Rebello and our very talented Mairi Addy – who not only plays trombone but also the accordion. Her foot tapping jig brought the house down. The very appreciative audience rewarded us with a standing ovation. 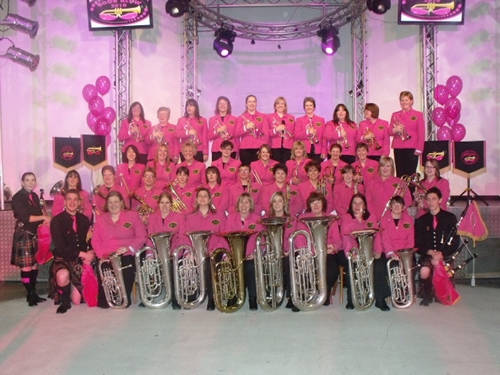 Butlins 2010
The Whit Friday Marches has always been fun – even the wettest one in history could not dampen the spirits of these amazing ladies – they carried on with soaked jackets, running mascara and bedraggled hair – it was just a shame the weather was not kinder to the two wonderful American ladies who had flown across the water to be part of the concept.
(Click HERE for their report!) 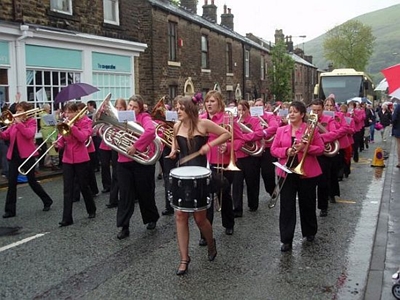 What these "brass banding boobies" do is not only very humbling but it encourages others to do something for the cause; John Lee, flugel player of Brighouse & Rastrick Band at the time of our "out of body" experience was so inspired by them that he invited us to accompany him on his solo album - "Whatever it Takes". Two years later Keith Farrington of Music House Productions who recorded our first CD instigated the recording of our second CD - "More Than Brass" which featured soloists John Lee, Mark Walters, Trevor Groom, Alison Bonnar, Michelle Ibbotson and Carol Jarvis. The generosity of Keith and John has enabled Boobs & Brass to donate in excess of £20,000 to the charity from these two exceptional recordings.
(Click HERE for more details)

All the people involved with “Boobs & Brass” love music and brass bands. Undoubtedly, the greatest single contribution that each player, conductor, soloist, arranger and supporter makes is that they do it all at their own personal expense, driven by one common aim – to raise money for researching a cure for breast cancer. During the seven years existence of this unique band, nine of the playing members have encountered this horrible disease and this makes us even more determined to raise what we can to enable the researchers to take another step towards finding the cure.

So how long can this incredible outfit continue? We do not know - but we already have bookings for 2015!! Jane and Maggie have been seriously discussing this and the only answer they can come up with at the moment is that perhaps they need to seek a sponsor for a pair of pink zimmer frames!!

Thank you all for your encouragement, help, donations and endless support. We could not have achieved all this without you. Please continue and help us all to “be part of the cure”.